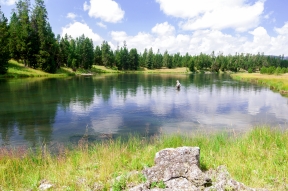 Henry’s Lake Outlet and the upper river above Island Park Reservoir have been producing some nice fish. Henry’s Lake is full and trout have been trickling through the dam into the outlet on a steady basis. The cool weather chased most of the recreational floaters off the river above Mack’s Inn. There have been some good hatches of PMDs and caddis with Green Drakes starting to show in the slower water. Look for Brown Drakes as the weather continues to warm up.

The flow from the dam has been holding steady at just over 900 cfs, a perfect level for the Box. Trout have still been looking up for Golden Stones. Use a size 8 Henry’s Fork Foam Stone with a 2-bit Hooker or Red Zebra as a dropper. Nymphs have been very productive. We like a double nymph system with a rubberlegs and smaller bead head. Another option is to use a heavy tungsten bead like the Anato Mayfly Nymph and a Zebra or Redneck. Lots of trout in the 10” – 14” have been showing up.

Making the call on what the Ranch will be like is always a bit of a crap shoot until it officially opens on June 15th. However, the fishing has really been picking up at Last Chance and below the Ranch at Wood Road #16 so there is no reason to think the Ranch won’t produce good fishing. Look for Pale Morning Duns, caddis and Green Drakes. There are lots of good patterns for the PMDs. My favorites are Sparkle Flag, cripple, and PMD Nohackles. When the caddis are coming off, especially in the evening, it’s hard to beat a size 16 Tan EZ Caddis. Drake patterns include Mike’s Extended Body Drake and Green Drake Cripple. For detailed information about the Green, Brown and Gray Drakes check out our my latest blog.

The flows bumped up again after the recent rains but this should be short lived. We’ve been seeing good hatches of PMDs and caddis. There are also plenty of Golden Stones. The drake hatches are on the verge of really taking off. This should be a great week on the lower river. Look for Green Drakes in the late mornings with Gray Drakes quick to follow on into the evening hours. The best activity for Gray Drakes is with the spinners. We like a size 10 or 12 Adams Split Flag and our Drake Spinner. Check out our last blog about the 3 drake species of the Henry’s Fork for more detailed information.

The Madison has been productive with nymphs and streamers even though it is a bit off color and a little higher than normal for this time of year. The section between the lakes has been productive as well as below Quake downstream to the confluence with the West Fork. It needs another week or so to get this recent precipitation out of its system.

The water is high but the Firehole has been productive. There have been some good hatches of Blue Winged Olives, PMDs and caddisflies. The caddis are very light colored. Our favorite pattern is actually a mayfly pattern called the PMD Tilt Winged Dun. Use a size 16 and its light’s out. There are lots of 8 – 12 inch trout.

Fishing has been pretty tough. There is no question that the overall population of trout is down. There are still some big fish being caught. Things should pick up later this month.

As of this writing it’s at flood stage in the upper valley. It will be a few weeks before the fishing shapes up.

The same story as the Teton – high water. The good news is the runoff appears to have peaked and things should come together again by early July.