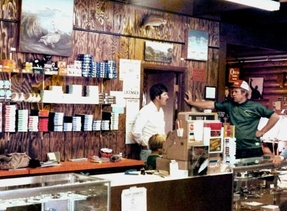 ​Henrys Fork Anglers opened for business in 1976 in Last Chance, Idaho along the banks of the world famous Henrys Fork of the Snake River.

Mike and Sheralee Lawson were both born and raised in the Henry’s Fork valley where their respective families have lived for four generations. Both graduated from Sugar Salem High School in Sugar City Idaho. Mike lived in a railroad depot where his father worked for the Union Pacific Railroad. Sheralee grew up on a potato farm. After high school they both attended Ricks Junior College in nearby Rexburg. Later they both graduated from Brigham Young University in Provo, Utah. They were not high…

Early in 1976, at the urging of Sheralee’s father, Frank Rydalch, they decided to open a fly fishing business in Last Chance near the Henry’s Fork. Frank secured the property and constructed a log fly shop with the help of his hired farmhand and a local contractor. Henry’s Fork Anglers was officially incorporated in the autumn of 1976 and the doors opened for business the following spring. Sheralee and Mike first leased and later purchased the building from Frank. Mike stayed in the sho…

Get Driving Directions
Meet Our Staff