Looking Ahead with Anticipation 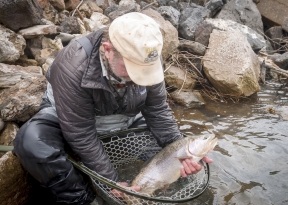 This is shaping up to be a bizarre year. We started out looking pretty good for our winter snowpack. In January it stopped. Check out my blog of March 1st. Things looked pretty grim. Our precipitation was 86% of average and the snow water equivalent (SWE) was 74% of average. My prediction was if we didn’t get cool, wet weather in March and April we would be in dire straits. So far things look much better. SWE is currently 75% of average and precipitation is 83%.

Winter snowpack is only part of the story. Spring weather can have a giant impact on our water situation. There have been a few years in the past where we have had above normal snowpack with warm, dry spring weather. The snowpack in the mountains is similar to a giant reservoir. When it gets warm we lose the water stored in the snow. When it stays cool the snow doesn’t melt as fast. Even if we don’t get a lot of precipitation cool weather can help the SWE.

We’re already getting inquiries about our famous hatches like the salmonfly and green drake. On average the salmonflies show up on the lower Henry’s Fork around May 20th and the green drakes about June 15th. It’s too far out to make a prediction but if our cool weather holds over the next month or so we should be right on. If it starts heating up it will move these hatches forward by as much as a week to 10 days. Over the 45 years we’ve been in business we’ve seen the salmonfly hatch start as early as May 12th and the green drakes around June 5th. There was a year or two when the salmonflies didn’t show up until after the first of June and the green drakes the first of July. I’ll be ready to make my salmonfly prediction in about 2 weeks. 2 years ago I hit it right to the day. Last year I was off by two days.

Right now is the time to focus on three major aquatic insect hatches which include Blue Winged Olives (Baetis), Mother’s Day Caddis (Brachycentrus) and March Browns (Rhithrogena). We’re already seeing some great hatches of BWOs. Look for the caddisflies and March Browns to show in good numbers by the second week of May.

Some of our best dry fly fishing of the entire year occurs from mid-April through mid-May. There are several good reasons why I like this fishing. First and foremost is that I’m not as suited to fish in the winter as I once was. There was a time when I didn’t think anything about trudging through deep snow and braving the cold. Not anymore. When the snow is gone (or partially gone) I can get to some of my favorite spots on the lower Henry’s Fork, Teton or the South Fork without laboring too much. It also gives me time to have a relaxing breakfast before I hit the river. I really like the pace of spring fishing.

The rivers are in great shape. The water is low and clear making wading less of a challenge for an old timer. Trout feed throughout the winter but they really get on the feed wagon when the first mayflies and caddisflies show up. You can usually find plenty of rising fish. While spring fishing has definitely become more popular, you can still find plenty of water that you can have to yourself. The downside of this fishing can be wind. April is a very windy month so you have to be prepared. That doesn’t mean the dry fly fishing isn’t good. Sometimes the wind concentrates the bugs into the bank or in the slicks. The trout will go where the bugs are.

I always get as excited when I see trout feeding on the first mayflies of the year as I did as a kid when Santa Claus brought me a red American Flyer bike. It’s hard to get more excited than that.