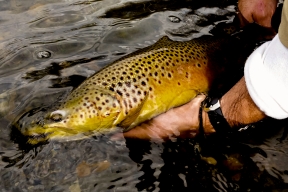 This is the time of year when anglers are anxiously awaiting the emergence of the first mayflies of the year but today I want to focus on another important order of aquatic insects commonly known as midges. Midges provide a very important food source on most trout waters. On some spring creeks, tailwaters and lakes they provide the most abundant food source for trout. One reason they are consumed in large numbers by trout is because most species hatch year round. Midges can complete a full life cycle in only a few weeks from egg, larva and pupa to adult.

My first encounter with these tiny insects occurred when I was a teenager. At that time we didn’t know anything about dry fly fishing. We caught plenty of trout swinging a pair of wet flies in the current. We also didn’t realize that trout could be caught with a fly rod during the winter months. One winter day we were wasting Emory Thomas’s time talking fishing at the Sugar City Mercantile. Emory was the proprietor and a fly fisherman.

He told us he had caught some nice rainbows below the Ashton Dam on snowflies. That information really peaked our interest. He gave us the scoop on what flies to use, how to do it and where to go. They were probably size 16 or 18, not small by today’s standards but pretty intimidating because the smallest fly we had ever fished was a size 12. When Saturday came around we headed up to Ashton. Unfortunately the air temperature that day was 19F and we got a serious butt kicking along with almost freezing to death. After reporting to Emory he told us that even though the flies would work under such adverse weather conditions, we should wait until the air temperature got above freezing.

When the weather was better we gave it another shot. When we arrived at the water we saw a few trout rising. We each tied on a pair of snowflies and fished them wet. They worked. We were amazed! We couldn’t believe that we could catch trout on small flies in the middle of the winter. The pattern we used was simple and easy to tie even for an amateur. We used a size 16 short shanked hook with dark fur dubbing ribbed with fine yellow floss with a few turns of grizzly hackle. We clipped the hackle so it was a little smaller than the gap of the hook. Our crude flies and method of fishing works as good today as it did then.

In order to be successful it is important to understand the life cycle of midges. They can complete a life-cycle from egg, larva, pupa and adult in a matter of a few weeks. Midges thrive in some tailwaters where the water temperature is too cold to support mayflies, caddisflies and stoneflies. Midges are prolific during the winter months on our local rivers like the Henry’s Fork, Madison River, South Fork and Teton.

Midge larvae are usually skinny and elongated like a worm. They come in a variety of colors from red, orange, tan and olive. During the cold winter months midge larvae are lively, active and available while mayfly nymphs are usually immature and inactive. Your best option to get it done in the winter is to use a double nymph rig with a midge larva pattern like a Tungsten Zebra Midge with a caddis larva. It’s important to get your flies down deep.

The pupal stage is the transition from larva to adult exactly like the life cycle of a caddisfly. As the head, legs, body and wings form the pupa swells as it fills with gases which buoy it to the surface. The pupae can drift a considerable distance pinioned in the surface film. Emerger and cripple patterns can also be very productive during the transitional phase from the pupa to adult. One of the most effective methods is to use a dry / dropper rig.

Adults usually fly away as soon as they make the transition from the pupa. They only have a few days to live as an adult and they make every minute count as they seek a mate. I have had limited success using an adult midge pattern. Mating is another story. It is very common for adults to cluster together when they mate and hover on the surface. While the Griffith’s Gnat was not actually tied to represent a midge cluster it is the best pattern by far to imitate a cluster of mating midges. My favorite way to fish a midge hatch is to use a size 18 Griffith’s Gnat with a midge pupa as a dropper. A small Parachute Adams also works nicely because it is easy to see and the trout take it more than one would expect. Make sure to keep the dropper only a foot or less from the dry fly.

There are several issues when using small dry flies in tandem. Attaching a dropper to the dry fly in the conventional manner will require two knots, one at the eye and one at the bend of the dry fly making the knots quite large when compared to the overall size of the dry fly. Another issue that can manifest itself when fishing double flies at the surface with a short dropper is micro-drag. Fishing a single dry fly dead drift can be difficult enough. Two flies attached with a foot of tippet in between can multiply the effect of drag dramatically. For that reason, unless the dry fly is quite large, I don’t tie the dry fly to anything. I simply thread the tippet through the eye of the dry fly and attach the dropper tippet with a blood knot. This allows the dry fly to slide freely up or down the tippet. Most of the time the trout will take the pupa but in the event that the dry fly is targeted, the knot below the eye of the hook will snub up against the eye when you set the hook and you’re in business.

You can catch trout on midges as long as you can handle the elements. I remember a day when my brother, Rick, and I set up a decoy spread below one of the Islands near the Ora Bridge to hunt ducks and geese. It was very cold and we were crazy. We had to set up in the quiet water below the island because ice would build up at the front of the decoy cord in the current and drag the decoy down the river. As we waited in the blind we watched trout feed lazily on midges in the quiet water. We picked up the decoys and went back to the truck to get our fly rods. After we warmed up we didn’t have the courage to face the elements again.

One question I often hear is how to keep the guides on your rod from freezing up? The answer is simple. I don’t go out unless the air temperature is above 32F. When I was young I went fishing whenever I could. I didn’t pay much attention to the temperature. Sometimes I had to melt the ice from my guides by holding my rod under the water.

This spring we’ve got Blue Winged Olive mayflies on the way to be followed by caddisflies but keep your midge box handy. You’ll need it.