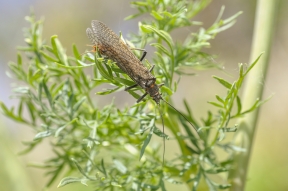 Yesterday morning we had 4” to 6” of new snow in Island Park. This great news for the 2017 season. Snow melts into water and trout love cold clean water!

The Box is the spot to be in Island Park. This great stretch of the Upper Henry’s Fork has been fishing very well. Rubberlegs and small bead heads. I would have # 8 black or brown Rubberlegs and a # 16 olive Zebra. Also try a #16 red Two Bit Hooker. We have been very successful in the box for the last two weeks. In talking with the people who know, current flows of 956 cfs is not likely to change for a while.

The Lower Henry’s Fork has been very consistent. We expect the Salmonflies any time. In the meantime the March Browns and Mother’s Day Caddis continue to produce some great fishing. Do not forget to bring a good supply of Rubberlegs. It’s always hard to predict when the adults will arrive but the nymphs are starting to the banks. The spring weather has been typical of the rocky mountain west, sunny and warm one day and close to six inches of snow the next. Come prepared for just about anything. As far as some patterns go for the lower river, I would have #6 and #8 black Rubberlegs. Have some Hemingway Caddis. I would also have some #12 and #14 Parachute Adams for the March Browns. I would make sure you had some #6 Henry’s Fork Foam Stones with you to. Just in case!

The flow on the South Fork has come down to 10300 cfs. However the river is off color. Keep an eye on the South Fork over the next week as it should start to clear up some. The Teton River is high, off-color and probably won’t be fishable for another few weeks.

The Madison has been a little tough over the last week. High dirty water has slowed things down. Plan on seeing the big bugs on the Madison around the last week of June this year. Take that with a grain of salt as it is always hard to predict. The Madison and all of our surrounding waters should really fish well this summer.

​Opens for fishing on May 27th. This is a great time to visit the park even if the fishing isn’t open. Lots of wildlife and not many people.