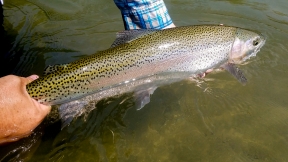 I published a blog on March 6 about what to expect for the upcoming season. It contained so much information that we decided to publish it in two parts. Part 2 is still to come. Since I wrote that blog COVID-19 and its effects and repercussions has dominated almost everything in our lives including fishing. Part 2 of my expectations for 2020 will come soon. I have it written so we’ll wait until the appropriate time. Right now there are a couple of other things we must address.

Frankly I’m tired of writing and thinking about COVID-19 but there is some news that I must share. Governor Brad Little introduced his 4-step process to reopen Idaho on April 23rd. His 14-day self isolation requirement for non-residents coming in to Idaho will continue through the end of May. However, we will be able to open our retail shop soon and we’re working on procedures to make sure we can stay safe. The Idaho Department of Fish & Game’s rule to suspend the sale of non-resident fishing licenses will continue indefinitely. We’re hopeful the IDFG will allow the sale of non-resident fishing licenses after the governor lifts his 14-day self isolation order for non-residents. I don’t want to take up all of my blog space on this subject. There is a great website with complete information about the governor’s order at this link.

Now let’s get into something I love to talk about – the salmonfly hatch. It’s always very difficult to predict when to expect the first nymphs crawling at the Vernon Bridge below Ashton. It is fun to try to pick the day and I’ve been right or close to right about 50% of the time. I’ve been experiencing this for more than 50 years now and it still just amazes me. The fact that most of the nymphs that live in a given section of river all emerge at exactly the same time is totally phenomenal.

The big question is when will it happen in 2020? I’ve seen it occur anywhere from May 13th until May 30th. On average the date is May 20th. Is this an average year? As of this date our snowpack is average at 101%. The carryover in Island Park Reservoir is above average. The weather? If it stays normal the runoff will occur in an orderly fashion. What is normal? Last year we had a snowpack a bit above normal and good carryover in the reservoir. Therefore they released lots of water in mid-April / early-May and back down to below normal flows by May 20th. This action pretty much wrecked our Mother’s Day Caddis hatch because of high water and messed up the salmonfly hatch due to low water. The river fishes best with higher water for the salmonfly hatch. It’s mostly dependent on water temperature. The previous year, 2018 was very different. The flow ramped up in mid-April, back down the second week of May and then back up by the 20th of May, just right for the salmonfly hatch.

If the weather is cool, as it has been for the past couple of weeks, the snowpack will sit where it is. If it gets warm and/or starts raining the snow will quickly turn to water and down the river it will go because there isn’t much room in the reservoir to catch it. What we want is high water for the last two weeks of May. Will that happen? The temperature for the next 10 days looks to be a little above normal. Based on the information I have before me, here is my call for the salmonfly hatch. The bugs will crawl at Vernon on May 19th.

Fishing the salmonfly hatch can be very challenging. The nymphs migrating to the bank of the river create a feeding frenzy for trout. They will literally gorge on nymphs. Up to two weeks prior to emergence the most reliable fishing is with nymphs. You’ll need plenty of size 4 and 6 black, brown or variegated Rubberlegs. You can usually get by with 2X tippet but you’ll still lose plenty if you’re fishing them right, meaning you need to bounce them off the bottom.

I’ve had my best dry fly fishing the first day or two after emergence and then later on after the hatch moves up the river. You can follow it all the way up through the Box Canyon. There are a number of great patterns but I always settle on my own creation of the Henry’s Fork Foam Stone in size 4 or 6. I like it because it is easy to see, it floats great, and the trout love it. Sometimes I clip the wing down so it will ride lower in the water. When the adults are flying they land all over the water so you can catch good fish in the runs out in the river, especially when there is a lot of boat traffic.

The Henry’s Fork is unique in that the peak of the salmonfly hatch shows up in different places at different times. After it starts at the Vernon Bridge it quickly moves up to the Ashton Dam. It also starts showing up above the Ashton Reservoir about the same time. The big stoneflies will also start emerging down the bank below the confluence of Warm River, a spring creek with a relatively constant water temperature, about the same time they’re emerging between Vernon and Ashton. At the same time the emergence will start up above the Island Park Dam in the Coffee Pot Rapids area, a section of river overlooked by all but the most astute angler. On the main river from Ashton upstream the hatch follows a more orderly progression, moving upstream a few miles a day. Normally it shows up in the Mesa Falls area a few days after the initial emergence at Vernon and reaches the Box Canyon about a week later. The tail end of the salmonfly hatch finishes up on the Lower Henry’s Fork below the confluence of Fall River from the Chester Dam downstream to St Anthony. The colder water of Fall River usually retards the hatch up to two weeks after the initial emergence at the Vernon Bridge.

Every angler who has ever fished the salmonfly hatch on the Henry’s Fork has certainly experienced some frustration. In the event that you start out with a bad day or two don’t despair. Perseverance will pay great dividends. Like many other salmonfly aficionados I have landed some of the largest trout ever on dry flies and I have lost some bigger ones. It’s a different experience from the tiny flies and light tippets necessary when fishing the ranch to hooking up a giant trout with heavy tippet in a great tug-a-war to see who can pull the hardest. I live for this!